The temple is a popular yatra destination for Hindus. In 2011 it received about 634,000 persons, the highest 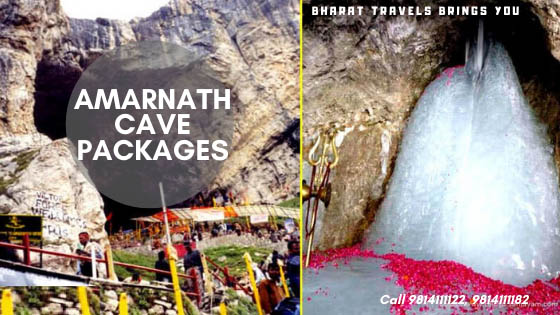 The beginning of the annual pilgrimage, called Amarnath Yatra  is marked by ‘pratham pujan’ to invoke the blessings of Shri Amarnathji.

Devotees travel on foot, either from Srinagar or from Pahalgam. The latter journey takes approximately 5 days.

The shorter northern route is just about 16 km long, but has a very steep gradient and is quite difficult to climb. It starts from Baltal and passes through Domial, Barari, and Sangam to reach the cave. The northern route is along the Amarnath valley and all along the route one can see the river Amaravathy (It is more like a tributary of Chenab) which originates from Amarnath Glacier.

It is believed that Lord Shiva left Nandi, The Bull, at Pahalgam (Bail Gaon). At Chandanwari, he released the Moon from his hair (Jataon). On the banks of Lake Sheshnag, he released his snakes. At Mahagunas Parvat (Mahaganesh Mountain), he left his son Lord Ganesha. At Panjtarni, Lord Shiva left behind the five elements – Earth, Water, Air, Fire and Sky. As a symbol of sacrificing the earthly world, Lord Shiva performed the Tandava Dance. Then, finally, Lord Shiva entered the Holy Amarnath Cave along with Parvati.

En route the cave, various non-profit organizations set up food supply and resting tents called pandals which are available for free to the pilgrims. Near the shrine, hundreds of tents which are erected by locals can be hired for a night’s stay. Helicopter services from base camp to Panjtarni (6 km from the cave) are also available from various private operators.